Happy New Year!
I’d say I’m surprised that it’s already 2016, but that would be a big fat lie.  2015 started out so well, but after many unfortunate events, I lost my mojo in a big way. I mean a really big way. I forced myself to complete projects that I had promised to people, but I really had a difficult time getting through them. I would usually wait until the last minute and then push myself to complete it in the time promised. It was the first time in almost 13 years that I haven’t done something creative every day. I made sure to photograph the things I did complete, just in case I found the urge to blog, but it didn’t happen. My laptop is sitting in several pieces, awaiting a part to repair it, so I had no way to access the pictures I did take. I stayed away from all of the trade shows and craft fairs that I usually participate in, and avoided taking on new projects, any excuse I could find to justify my lack of desire to create. It really was a drab and boring several months. I did get my quilting area reorganized (that was a massive undertaking) thinking that it would help to inspire me, but it did no such thing. It wasn’t until December that found my spark again. In the end, there were three things that helped me find my mojo.

The first thing to happen was my beautiful cousin giving birth to a precious baby girl on December 5. I can’t pinpoint exactly why her pregnancy and the birth of her daughter resonated with me so, but as soon as heard the news I couldn’t wait to get to the machine. We had spoken earlier about a colour palette, and I had pulled a selection of fabrics a few days prior.

It took me a few days to figure out what I wanted to do, but I’ve now rounded out my palette and gotten everything cut out. I have about 1/3 of it sewn, but I had to put it aside as things got really busy around here.

The second thing that happened was that we said goodbye to a wonderful, kind man. My uncle Walter passed away on December 12. He was the sweetest, most patient man I’ve ever known. Uncle Walter was a tailor by trade, and I always felt a connection with him. When I was in high school I wanted to take tailoring, move to Saskatoon, and open a shop with Uncle Walter called “Walter Alters”. My cousin, his daughter, just reminded me of that at Thanksgiving, and I couldn’t help but giggle. I have so many wonderful memories of holidays, and summer vacations, and family events, and Uncle Walter was a part of them all. I recall as a teen being annoyed by Uncle Walter’s attention, and the questions he asked when we would see each other after months of no contact. It wasn’t until I was older that I began to appreciate the fact that he was genuinely interested in me, and what I had been doing. He had a way of making me feel special just by spending a few minutes talking with me. I thought about Uncle Walter often in the weeks after his passing, and such beautiful memories helped to heal my soul. It is so fitting that I thought of him most often when I was downstairs, choosing, pressing, cutting, and folding fabrics for the baby quilt. I will miss him so very much.

The last thing that triggered a spark in my soul was project that I have been putting off for 18 months. Yes, you read that right. My neighbour had asked me ages ago if I could make a memory quilt out of her daughter’s baby clothes. I said I could, took delivery of the tote of clothing, and filed it away under my sewing table. It was always there in the back of mind, but I was not eager to tackle it because of the sheer volume of work it required. I kept putting it off until she finally got tired of waiting and asked if could complete it in time for Christmas. This was a few months ago, so I assured her I would have it done. And then I left it. And left it. And left it. Finally, at the beginning of December, I pulled the tote out and started to think about what I was going to do. I had an idea of what she wanted, but I had no clue how I was going to execute it, or even where to begin. It wasn’t until the last week before Christmas that I finally got to it. I used simple squares in 2.5″ , 4.5″,  and 6.5″ and just let it come together how it may. I missed the deadline by a few days ( I cleared it with her before I did) and almost wrecked myself getting it done, but she loved it so it was worth it in the end. It surprised me how much fun I had working on it. I am thrilled that it is done, and I am even more thrilled that I enjoyed myself!! 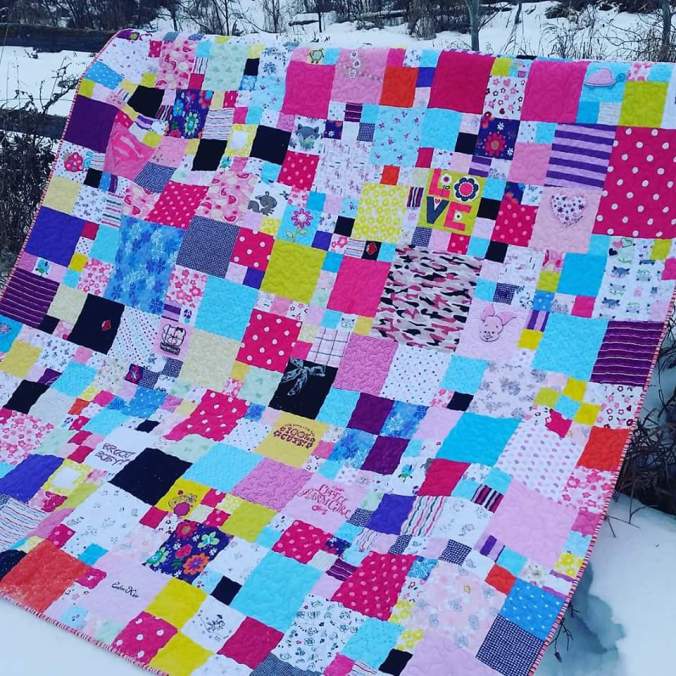 I’ve even been back downstairs every day since, sometimes sewing, sometimes just puttering, but at least I’m down there again. I’m excited to see what 2016 brings!